When the Los Angeles Dodgers were deciding on a starter for Opening Day and rotation order after that, the home opener was also factored in. Clayton Kershaw unsurprisingly was named the Opening Day starter, and he was followed by Trevor Bauer, Walker Buehler, Julio Urias and Dustin May.

That order allowed for Kershaw to soak in the World Series ring ceremony at Dodger Stadium, and gave Buehler a chance for another marquee start in the home opener. Although he could not participate in the pregame festivities, Buehler reveled in receiving his ring after the game.

He also used that opportunity to provide teammates and coaches with a custom engraved bottled of Eagle Rare 10-Year Bourbon in partnership with Buffalo Trace Distillery. Buehler is a fan of Eagle Rare bourbon and their “Reach Higher” mantra.

“The ‘Reach Higher’ mantra resonates. You’ve got to find a level of excellence. Reaching Higher for me is more about repeating success and year after year being able to get to that level. I think that coincides with a bourbon brand,” Buehler said. 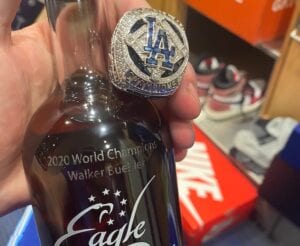 “You don’t want to have one good year of a bourbon, you want to continuously be able to achieve excellence. As a player, that’s what we want to do so ‘Reach Higher’ definitely applies to me. Being mature is a huge part of our game, with the travel, the lifestyle, the everyday – trying be there, be present and be successful.

“The parallels between my career and bourbon are always going to be a little bit intertwined, being from Kentucky and bourbon country. The past 10, 12 years where bourbon has blown up parallels my career in that things have started to come around for me and our state – and a lot of that centralizes in these distilleries.

“I’m very proud to be from Kentucky and to have gotten where I have.”

Jostens hand-crafted the 14-karat 2020 Dodgers World Series ring, which features white and yellow gold with diamonds and sapphires throughout. The ring has approximately 222 round diamonds, 10 princess-cut diamonds, 45 custom-cut genuine sapphires and eight round genuine sapphires.

Have you subscribed to the Dodger Blue YouTube channel? It’s the best way to watch player interviews, participate in our shows and giveaways, and more!

The Los Angeles Dodgers didn't have a hit through the first three innings, then…